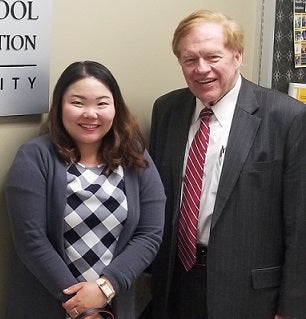 His visit was sponsored by ICGlobal and The Transformation Project research collaboratives at the Hugh Downs School, as well as ASU’s Center for Asian Research and the Center on the Future of War.

More than 50 students and faculty, predominantly within the communication and political science departments at ASU attended the lectures, held at the Memorial Union and at the Hugh Downs School.

Ambassador King served as special envoy for North Korea human rights issues at the U.S. Department of State. He was nominated by President Barack Obama, confirmed by the U.S. Senate, and served in that position from November 2009 to January 2017.

Ambassador King currently serves as a senior advisor (non-resident), Korea Chair, at the Center for Strategic & International Studies (CSIS). YoungJu Shin, assistant professor at the Hugh Downs School and affiliated faculty at the Center for Asian Research, was recently named as a 2018-19 U.S.-Korea NextGen Scholar by CSIS and University of Southern California’s Korean Studies Institute and has had the opportunity to work with Amb. King in this capacity.

In his public talks, Amb. King first set a clear tone about why South Korea is one of the United States’ most important strategic and economic partners in Asia, as South Korea has the 11th largest economy in the world after the US, China, Japan, Germany, and other developed countries.  Since the 1950s, the US-South Korean Mutual Defense Treaty commits the US to help South Korea defend itself.  Washington and Seoul cooperate in addressing the challenges posed by North Korea.

King provided a unique insight into North Korea, which remains one of the most isolated places on earth.

“North Korea is a place where it is illegal to own a radio that can be tuned. In fact, you cannot buy a tunable radio in North Korea; it is preset to the government channel,” said King.

King added that, despite this, from interviews with people who have left North Korea, “somewhere between 20% and 30% of the North Korean population indicate that they have listened to foreign radio broadcasts, so there's a certain amount of information going into North Korea, and it appears to be increasing.”

North Korea is also a place where, until recently, it has not been possible to have a cellphone.

“In North Korea, you can only call other North Koreans. You cannot make foreign calls, and you cannot call foreigners who live in North Korea.”

During his tenure with the U.S. State Department, King was involved in numerous attempts to free Americans imprisoned by the North Korean government.

The ambassador visited the capital of North Korea, Pyongyang, in May 2011 as part of a trip to assess the country’s need for humanitarian assistance, but also to secure the release of Korean-American Eddie Jun, who had been held in the country for six months on unspecified charges. It was the first visit to North Korea by a U.S. official in two years.

“The North Koreans are signatories to the Universal Declaration of Human Rights. If we let them get away with doing nothing on human rights when they've committed themselves to observe those human rights obligations, what does that say about our ability to press the North Koreans to make progress on international nuclear standards we're trying to get them to accept?”

King says that U.S. President Donald Trump has used human rights not as something we need to work on but as a stick to beat the North Koreans until they come around to talking about nuclear weapons. “He was very careful to mention human rights in his United Nations speech in the fall of 2017. He mentioned it in 2018 in his State of the Union address.”

King added, “After both summits with North Korea however, nary a word from the White House on human rights conditions in North Korea.” King argued that foreign affairs and diplomacy should continue efforts to bring human rights issue back onto the table again and the need for humanitarian assistance should not be neglected.  Furthermore, King concluded that human rights should be used as a means to help negotiate the issue of North Korean denuclearization, than an end.

Ambassador King closed his talk at the Hugh Downs School reminiscing about a study abroad trip he undertook as an undergraduate.

It was 1965 and Amb. King was in Europe with 125 fellow students. On a weekend trip to Hungary, he toured Budapest's Matthias Church, where the last Hungarian kings were crowned. Only the crown on display at the church wasn't the Holy Crown of Hungary. The real crown, he learned, was in the United States.

At the end of World War II, just as Russia's Red Army was marching on Budapest, the crown was spirited away, buried in Austria, then dug up and ultimately given to American occupation forces, only to be secured along with U.S. gold reserves in Fort Knox.

The story stuck with King years later when he applied for a White House Fellowship.

"The application required a mock memo to the president," says King, who was then working for Radio Free Europe in Germany. He suggested ways the United States might improve relations with Eastern Europe. "Among the steps that I proposed was the return of the Hungarian crown," says King.

From King's first week as a White House Fellow on the National Security staff, he helped make the arrangements, and he was a member of the delegation that returned the crown.

As the crown—the one that had crowned every Hungarian king since the 13th century—was presented on a red velvet pillow in the Hungarian Parliament Building, "an audible gasp went up from the people in that hall," says King. "It was the preeminent symbol of Hungarian nationhood coming home. It was very, very emotional."

"And to think that for me it started when I was an undergraduate," added King.

According to Professor Benjamin Broome, whose expertise includes conflict resolution and peacebuilding, Amb. King’s career demonstrates the importance of human communication in almost every aspect of diplomacy.

“His long journey of service took him to many countries during important historical moments, and it was both fascinating and instructive to hear him describe behind-the-scenes details and the nuances of negotiation and conflict management in his work.”

This observation is echoed by Assistant Professor YoungJu Shin, who said, “Ambassador  King’s visit gives even greater impetus for research and teaching by Hugh Downs School faculty and students in intercultural communication, especially as we face increasingly complex challenges on the global stage.”