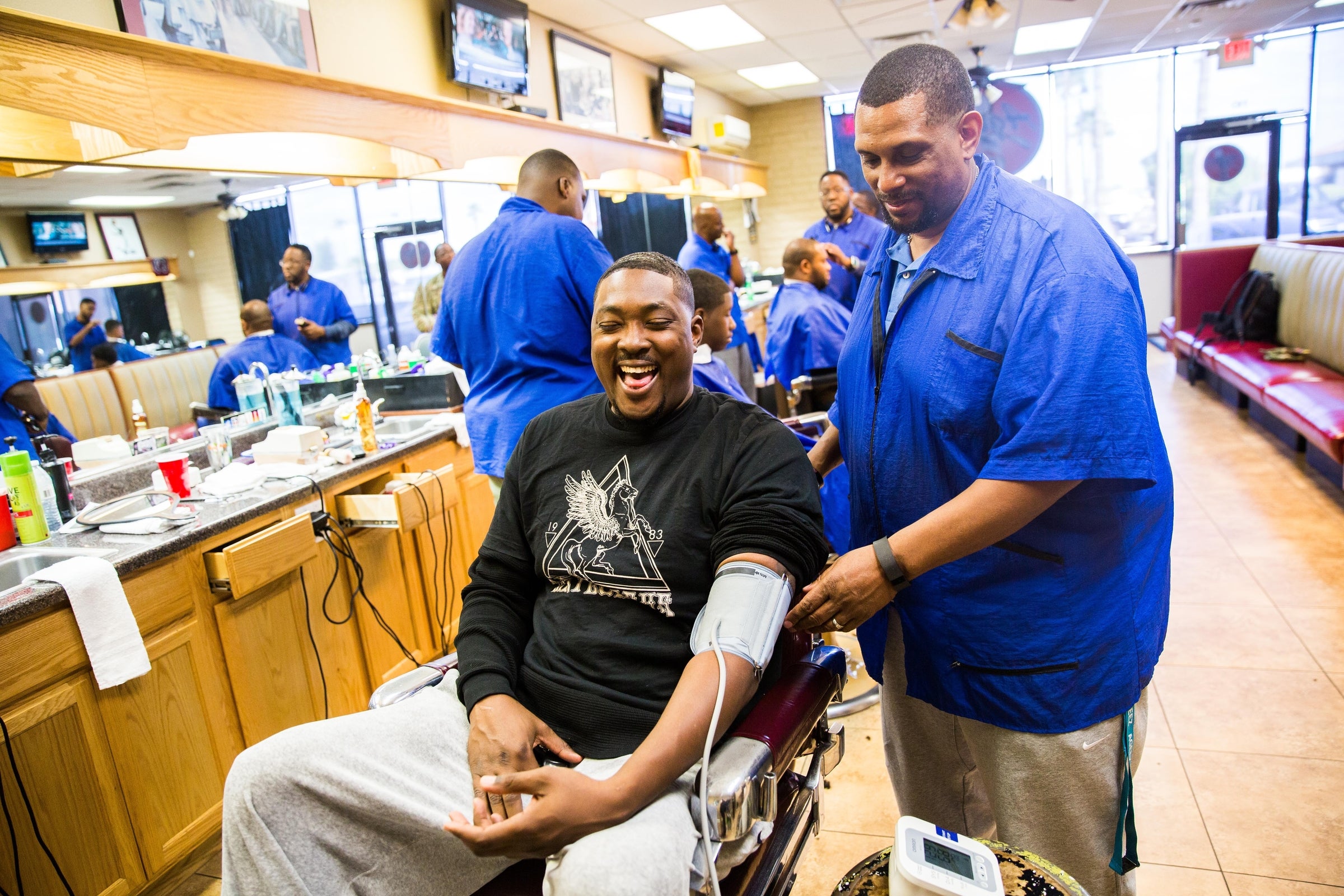 Shave and a health check

Barber Marvin Davis takes pride in knowing his clients’ likes and dislikes. He knows how high to cut their hair, knows when they’re due for a shave and when they aren’t feeling their best.

And when that happens, he also knows how to talk to them about their health.

Health is an important topic to Davis, who knows that conditions such as hypertension, cardiovascular disease, prostate cancer and diabetes are claiming the lives of African-American men in record numbers. That fact was underscored by a customer whom Davis recently groomed.

“A customer who’s a mortician came in a few weeks ago. I was clipping his hair, making small talk and asked, ‘How’s business?’ He said without hesitation, ‘Very good,’ ” recalled Davis, who was taken aback.

The mortician told Davis that the average age range of his dead black clients was between 30 to 50 years old, which Davis said chilled him to the bone.

“The sad part is, most of them died from diseases that would have shown up on a blood-pressure machine, which is why we keep one in the shop,” Davis said.

Davis is the manager of Ageez Hair Center in Chandler and is one of a handful Phoenix-area barbers who sit on the steering committee of the African American Cardiovascular Disease Health Literacy Demonstration Project. The project puts an emphasis on prevention and health literacy through culturally grounded community efforts for African-American men in the greater Phoenix area. Participating barbershops and hair centers are supplied with blood-pressure monitors — and training — to give readings to their customers.

“Barbers hold a unique and esteemed place in the African-American community,” said Dr. Olga Idriss Davis, who is principal investigator for the project and for community engagement at the Southwest Interdisciplinary Research Center (SIRC).

“The culture of the black barbershop is a folk tradition, a gathering place in the male community, a site where knowledge can be traded, disputes resolved and wisdom transferred from generation to generation. It’s a wonderful microcosm of society.

“Barbers are looked upon as leaders in the African-American community. Clients often tell their barbers intimate things, sometimes things they would never tell their partners and family members.”

Dr. Davis, who started the project in 2013, admits it took her a while to earn the trust of the barbershops and the surrounding communities in which they serve.

“Researchers employed by institutions of higher learning have not had the best interactions with African-American and Native American communities. Historically, they smile at the door, gather data and leave without any follow-up that supports the community,” Dr. Davis said. Dr. Davis said even though she’s African-American, it didn’t entitle her to a free pass or easy entree into the community. That trust had to be earned over a long period of time.

“Early in my research and fieldwork there was a woman from the community who frequented a barbershop, and all of the barbers were her ‘babies.’ She walked into the shop one day, and asked the barbers, ‘Who is this chick on my turf?’ ” Dr. Davis said. “She then got an inch away from my face and said, ‘I wanna talk to you. You’re one of them and you’re here to take our stories. You’re part of the establishment.’ ”

Dr. Davis calmly explained to her that nearly 50 million men in the U.S. have high blood pressure, 40 percent of whom are African-Americans. She added that African-American males are particularly at risk because they are often unaware of the disease, do not receive treatment and rarely adhere to a treatment regimen if one is prescribed. That had to change, Dr. Davis said.

She then explained a vision: transforming barbershops into a health-care space where barbers become “community health advocates.” Dr. Davis said it was a moment where she could see the woman’s defiance morph into understanding.

“I told her, ‘I want this to have a ripple effect throughout the entire African-American population, not just in this community … but I’m going to need your help, too,’ ” Dr. Davis said. “She finally got it and smiled, then said, ‘You all right, sister.’ I said, ‘You’re all right, too, sister.’ We’ve been good ever since.”

So has the program, which had made serious headway in the African-American communities in Chandler and south Phoenix. Barbers are casually talking to their clients about their health and discreetly taking blood-pressure readings.

“I usually say, ‘Hey man, sit down and let me take your numbers, check you out and make sure you’re all right,’ ” said Anthony Gathers, the owner of Ageez Hair Center who sits on the steering committee with Marvin Davis. “In this business you get to know your clients and so it’s not real hard to get them to allow you to take their blood pressure. Then others see it and they say, ‘Hey, take mine, too.’ It catches on.”

And sometimes they catch on to others’ health issues before they become a crisis. “I can definitely tell when someone has an iron deficiency, and I counsel some of the younger men about getting insurance under the Affordable Health Care Act,” Gathers said.

He recalled an incident in the shop where a customer had a seizure and an ambulance had to be called. Another time a customer’s blood-pressure numbers were “off the charts,” and he was forced to sit in the barber’s chair until he was escorted to the hospital.

Those sorts of health scares, as well as countless opportunities to gently counsel their clients on their well-being, makes the barbers more resolved than ever before.

Dr. Flavio Marsiglia, director of the SIRC, said the project is highly relevant and innovative, pointing out that the project has the possibility to address other health conditions in the future.

“Other communities around the nation are closely looking at this demonstration project as a model,” Marsiglia said.

The next phase of the project includes partnering with hair stylists in African-American beauty shops.

“What we underscore at SIRC is that ‘culture matters.’ Culture is an anchor in developing health promotion and health interventions where communities and their culture count,” said Olga Davis.

Gathers said clients also count, whom he views as extended family, and only wants the best for them.